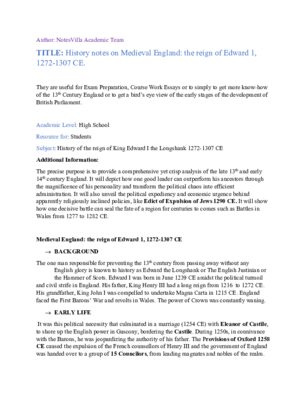 An excellent summary from NotesVilla academics on Medieval England and the reign of Edward 1.

The precise purpose is to provide a comprehensive, yet crisp analysis of the late 13th and early 14th century England. The notes depict how one good leader can outperform his ancestors through the magnificence of his personality and transform the political chaos into efficient administration. It will also unveil the political expediency and economic urgence behind apparently religiously inclined policies, like the Edict of Expulsion of Jews 1290 CE. It will show how one decisive battle can seal the fate of a region for centuries to comes such as Battles in Wales from 1277 to 1282 CE.

I like these short but to the point notes