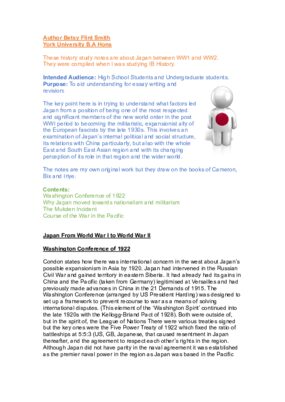 These History study notes are about Japan between WW1 and WW2.

The key point here is in trying to understand what factors led Japan from a position of being one of the most respected and significant members of the new world order in the post WWI period to becoming the militaristic, expansionist ally ofthe European fascists by the late 1930s. This involves an examination of Japan’s internal political and social structure, its relations with China particularly, but also with the whole
East and South East Asian region and with its changing perception of its role in that region and the wider world. The notes are my own original work but they draw on the books of Cameron, Bix and Iriye.
Contents:
Washington Conference of 1922
Why Japan moved towards nationalism and militarism
The Mukden Incident
Course of the War in the Pacific